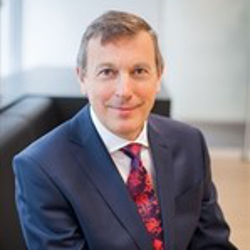 After graduating from the University of East Anglia with an honours degree in Mathematics and then gaining a post graduate Diploma in Accounting and Finance, John began a career in IT. He trained as a systems analyst with the London Brick Company, held senior positions with Ernst & Young and worked in Chicago with leading software company SSA. In 1995 he was appointed CEO of the Rocket Networks, a California based dot.com that provided the world’s first online recording studios. He returned to the UK in 1998 and became Director General of the Computing Services and Software Association, one of Intellect’s predecessors.

John is a member of the governing body of the University of Warwick and chair of its audit committee. John’s other recent committee chair roles include the cross industry association council of the CBI, a government/industry space committee and the global policy action committee of the World IT Services Association, WITSA. He is a board member of e-skills, the UK’s digital sector skills council and a Fellow of the Royal Society of Arts. He was presented with two personal awards for outstanding contributions; first to the association sector in 2004 and then to the IT industry in 2008. The Queen appointed him a Commander of the British Empire (CBE) in 2005 for his services to the UK IT industry.