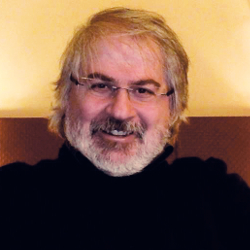 Since 2010 Gianpiero Lotito is the founder, with Mariuccia Teroni, of FacilityLive, a startup that is launching on the international market a next generation search engine.

FacilityLive owns patents in 43 countries including USA (benchmarking Google as “prior art”), Europe, Japan and Israel. Nigel Kendall, technology editor of The Times, defined it “a technology that could change everything on the Web”.

FacilityLive is the first non-UK company ever selected by the London Stock Exchange for its ELITE Programme, a unique platform designed for the most exciting and ambitious private companies to prepare and structure for their next stage of growth.

FacilityLive was also selected among the “Starter exhibitors” at 2014 WebSummit in Dublin that it’s been called “the best technology conference on the planet”.

Gianpiero is a technologist, with an important musical career in the ‘80s, who has been working for over twenty years on innovative projects in the publishing world and on technologies applied to content.

He has also taught Multimedia Publishing at the University of Milan and written books, such as “Digital Emigrants” and “A brief story of startups”, and articles on technology for major Italian editors like Bruno Mondadori and Gruppo Espresso.

Gianpiero is “Ambassador” of the “E-Skills for Jobs 2014” project under the Grand Coalition for digital jobs of the European Commission and is a regular speaker at international events such as #DigitalVenice, Pisa Internet Festival, Single Market Forum, and at the European Internet Forum, European Parliament and TEDx.