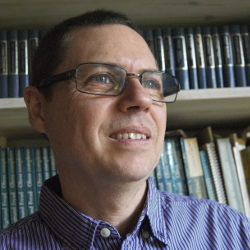 Gabriel Rissola joined Telecentre-Europe, the European network of digital learning & empowerment centres, as Managing Director in 2012. He is also Partner and Associate Researcher at D-O-T, a research & consulting firm he co-founded in 2006. He has a degree in Informatics, academic education in Philosophy and Psychology and wide professional experience in international environments, including positions as Senior Researcher at JRC-IPTS, one of the 7 European Commission’s in-house scientific centres (2010-2012), Evaluator of European grant proposals (2004-2010) and external Senior Consultant for United Nations agencies (FAO, UNITAR) (1990-2009). He started his professional career designing and coding software for small enterprises in 1988, becoming an Internet pioneer in the ‘90s and a dotcom & electronic media entrepreneur in the transition to the new century. His interest is focused on understanding and enabling the conditions in which ICT can accelerate or catalyse social and economic changes in a globalized society.